The Democratic Party had a better 2022 midterm than was forecasted. Most election observers believed – with the polling to back it up – that issues like the economy, and the fact that the first midterm is usually unforgiving to the President’s party, would deliver both chambers of Congress to the GOP. This did not happen, as the Senate became bluer while the House was taken by the Republicans in what was more of a red trickle than a wave.

Kantar CMAG will look over what ad messaging allowed the Democrats to achieve this holding action and what failed the GOP in their attempts to leverage national dissatisfaction with the current administration into a more resounding electoral outcome.

Democrats focused on abortion and healthcare

Looking at Democratic messaging across all races, we can see that “Abortion” has the most dollars behind it ($214M, first by a considerable margin). This is unsurprising given the Dobbs decision which occurred this past summer, but the figure still staggers. In second place we see a traditional Democratic strength - “Healthcare” – clocking in at $153M.

Resisting GOP attacks that they are “soft on crime” and responsible for increased crime rates, “Public Safety” was the 3rd most-common issue in Democrat advertising in 2022 ($122M in spending). Issues related to “Budget/Government Spending” slotted into 4th place with $115M spent, while “Taxes” round out the top 5 on this list with $99M. 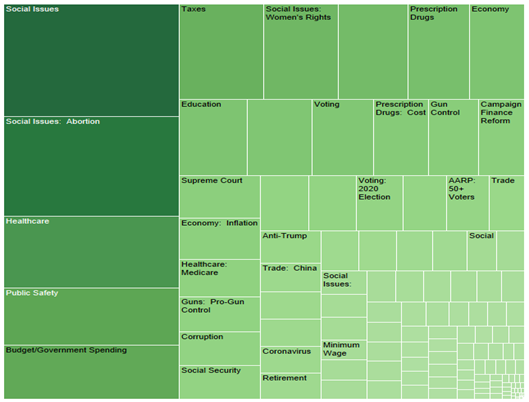 When viewing the top 5 issues appearing in Democratic advertising from an airings perspective, the abortion issue again tops the list with 838,345 occurrences. Mirroring the figures behind ad dollars spent was the “healthcare” issue – which came in (a distant) second in this category with 669,421 airings. “Budget/Govt Spending” slots into third with 550,099 occurrences.

Spots mentioning “public safety” trail closely with 504,771 occurrences while “taxes” – with Dems often touting their efforts to get the wealthy to pay “their fair share” – rounds out the top 5 in this category with 452,076 airings. 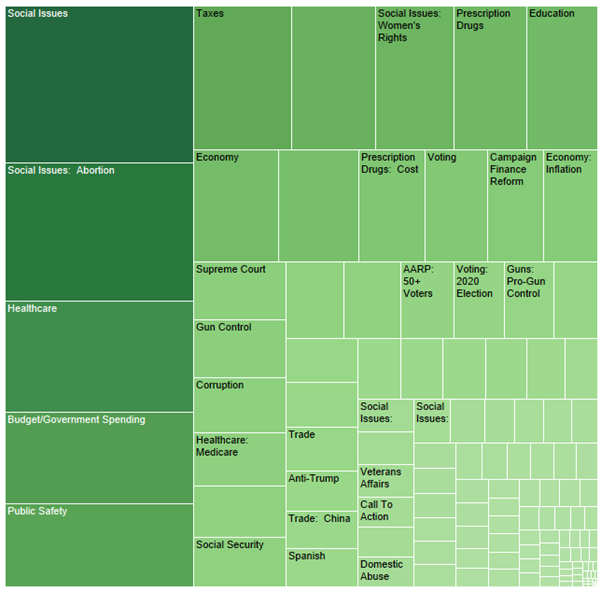 Taking a markedly different tack than they did earlier in the year, the Republicans moved away from the “immigration” issue this fall - it did not even make the top 5 most-targeted issues. Ads related to concerns over crime – “Public Safety” – took the top spot with $198M in spending. “Budget/Govt Spending” – with the GOP taking the Dems to task for what they termed “reckless spending” – slotted into 2nd with a $195M expenditure.

In ads criticizing the “Inflation Reduction Act” passed by Dems, the GOP messaged heavily on tax increases, spending approximately $174M on this issue in their ad campaigns. Spots referencing the economy – often with a focus on the inflation crisis – came in 4th this cycle with $152M spent, while ads critical of President Biden [“anti-Biden”] brought up the rear with a $139M expenditure. 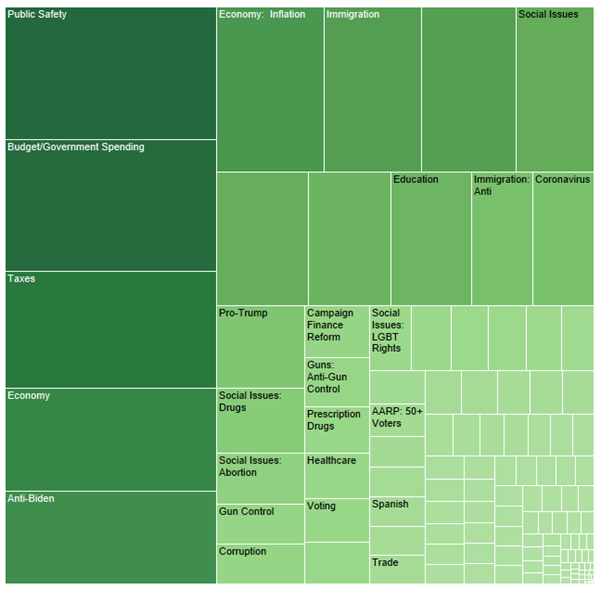 Looking at which issues aired the most in their ad campaigns, there was a slight reshuffling of priorities. “Budget/Govt Spending” was the most heavily advertised in GOP ads for the 2022 midterms with 930,810 airings. “Public safety” came in a very close 2nd with 892,510 occurrences while ads referencing “Taxes” slotted into 3rd with 844,134 airings. “Economy” was close behind in 4th place with 725,637 occurrences while “Anti-Biden” creatives closed out the top five with 693,511 occurrences. 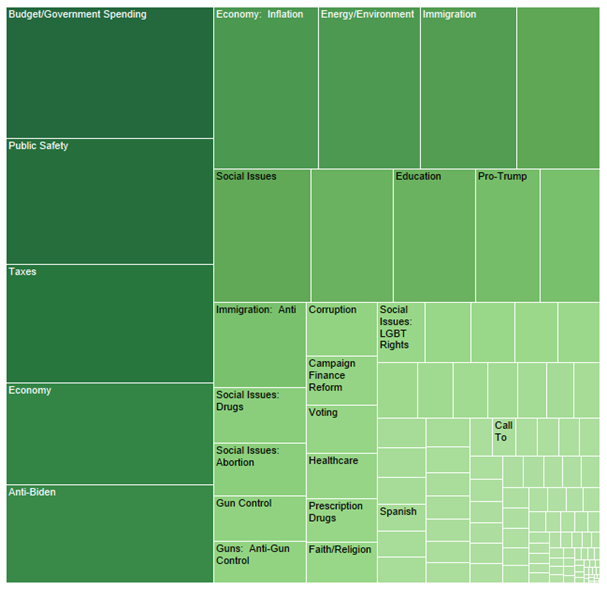 When assessing the differing ad strategies between the two parties, two clear takeaways emerge: Relative to their 2016, 2018 and early 2022 ad campaigns, the GOP turned down the volume of their messaging on immigration concerns and returned to their historical strengths concerning the economy and crime; while the Democrats jumped on the repeal of Roe to play up public anxieties regarding the healthcare implications of abortion bans. This enabled the Democrats to exceed electoral expectations. While the Republicans did take back the House, their failure to take back the Senate will occasion some difficult conversations at the RNC, NRCC and NRSC in the runup to the 2024 general election.