The discounters have seen dramatic sales increases in recent months, bringing more and more customers through their doors as the pressure of rising costs mounts. 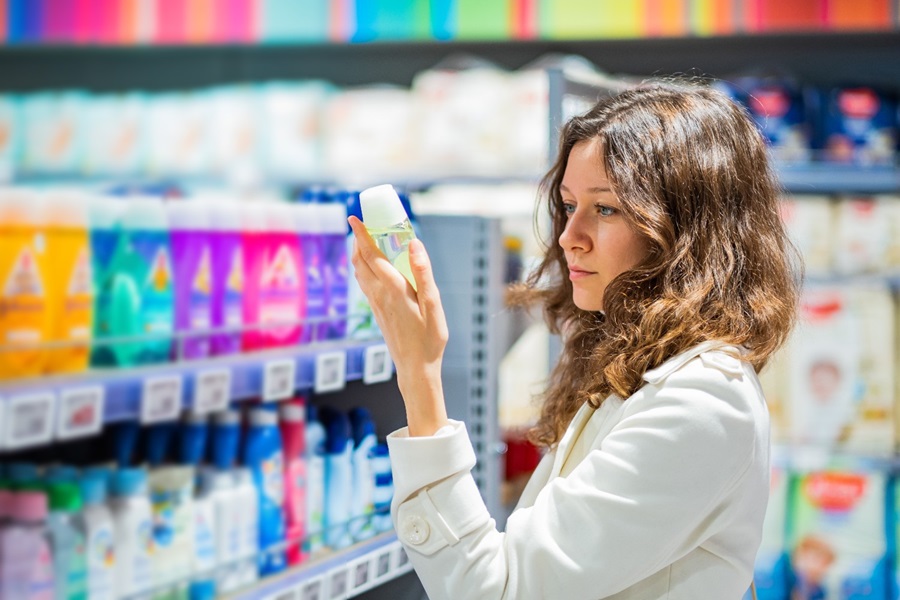 Take-home grocery sales increased by 3.8% in the 12 weeks to 4 September 2022 according to our latest figures. This is the third month in a row that the sector’s sales have grown after over a year in decline as a consequence of comparisons with the pandemic. The rise comes as grocery price inflation hit 12.4% during the past month, a new record based on our data.

It seems there’s no end in sight to grocery inflation as the rate at which food and drink prices are increasing continues to accelerate. Now standing at 12.4% for August, the latest figure means that the average annual grocery bill will go from £4,610 to £5,181 if consumers don’t make changes to what they buy and how they shop to cut costs. That’s an extra £571 a year. Categories like milk, butter and dog food are jumping up especially quickly at 31%, 25% and 29% respectively.

In what is a fiercely competitive sector, supermarkets are reacting to make sure they’re seen to acknowledge the challenges consumers are facing and offer best value, in particular by expanding their own-label ranges. Their efforts seem to be well received by consumers with sales of the very cheapest value own-label products up by 33% this period versus a year ago and nearly one in four baskets containing one of these lines. Overall spending on all retailer own-label lines was £393 million higher during the latest four weeks, pushing own-label’s share of the market to 51.1%. 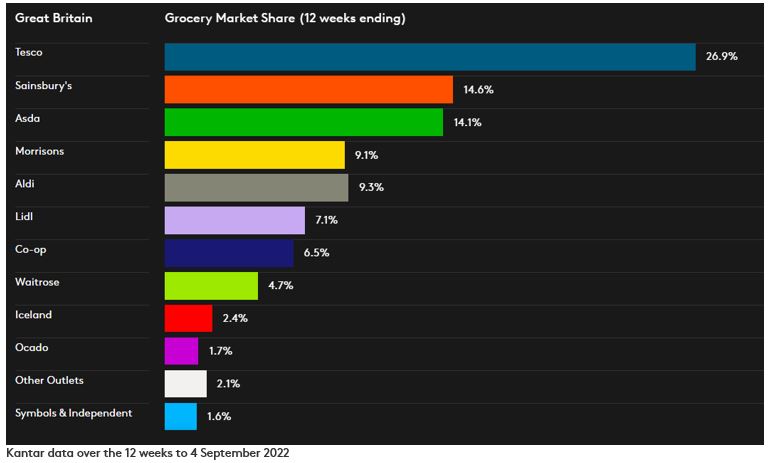 Shoppers are taking steps to manage their budgets including broadening the range of stores they visit, with the discount grocers benefiting. Aldi’s sales rose by 18.7% over the 12 weeks to 4 September 2022, reaching a 9.3% market share and making it Britain’s fourth largest supermarket for the first time. Meanwhile Lidl grew sales by 20.9% and its market share has increased to 7.1%.

Back at the start of the 2010s, Tesco, Sainsbury’s, Asda and Morrisons together accounted for over three quarters of the sector but that traditional big four is no more. The discounters have seen dramatic sales increases in recent months, bringing more and more customers through their doors. Aldi has done well to expand its shopper base, supported by consistent store openings, and with 14.2 million consumers visiting the grocer in the past three months. Meanwhile, for the fourth month in a row Lidl was the fastest growing grocer and recorded its strongest sales performance since October 2014.

Even with rising prices, parents had to prepare for the end of the summer holidays as the majority of schools went back in early September. In the week before the schools reopened, to 4 September 2022, parents were clearly stocking up and getting ready for the return of the traditional packed lunch. Sales of sliced bread were up by 12% in comparison with the previous three weeks, while cheese snacks grew by 18% and children’s’ yoghurts by 57%.

Iceland won market share in the latest period and its sales are 5.8% higher than in 2021. Tesco, Sainsbury’s and Asda all achieved their best sales performance since April 2021. Tesco’s market share now stands at 26.9% following a 1.9% boost to sales, while Asda currently holds 14.1% of the market following 2.2% sales growth. Sainsbury’s accounts for 14.6% of the market.

Co-op held its 6.5% market share while securing an 2.7% increase in sales. Morrisons holds 9.1% of the market, Waitrose has a 4.7% overall share and online grocery specialist Ocado has 1.7% of the market.