Kantar’s team of analysts hit stores and sites on Black Friday and came away with some distinct impressions.

Here’s a rundown of the key themes we saw this year along with our take on how you should be interpreting various Black Friday performance reports.

Aligned with Kantar estimates and expectations, online continued to drive Black Friday sales growth. While the occasion continues to blur into other seasons, with a particularly early start to the holiday this year and Cyber Monday hard on its heels, Black Friday sales appeared to be healthy this year. Black Friday delivered a record $7.4 billion in eCommerce sales, up nearly 20% from $6.2 billion in 2018, according to Adobe Analytics, which also reported that buy online, pick up in-store transactions grew 43%, reinforcing retailers’ growing ability to integrate online and offline. 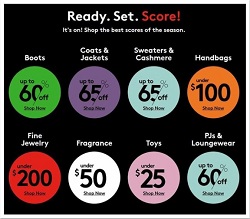 Rachel Dalton spoke to Yahoo Finance about prolonged deals, Amazon exclusives, and the battle for brick-and-mortar. Watch the video

At the same time, others like Costco seemed to de-emphasize Black Friday as a stand-alone shopping period this year. Of note, Costco experienced significant website issues that lasted from early Wednesday night through Black Friday.

Walgreens, Dollar General, Five Below, and other smaller format retailers extended Black Friday deals through the weekend to maximize store traffic and minimize inventory exposure. Five Below leaned on exclusives, such as Disney gift deals, to drive store traffic, which, by our accounts, was quite strong (Figure 2). Meanwhile, Dollar General and Walgreens focused more on holiday messaging.

Best Buy benefited from strong perceived store traffic, driven by smartphone sales, video games, and electronics. Best Buy was also among several retailers to lean into toy more strongly than we have seen in the past, particularly as a growing share of toy spend extends to technology- and gaming-based products and experiences.

Retail implication: As holiday deals continue to creep into Black Friday and vice versa, shoppers may benefit from more clarity on what a Black Friday deal really is. At the same time, as shoppers expect more and bigger deals throughout the holiday season, Black Friday as a stand-alone event becomes less relevant.

Doorbusters Stand Out as the Draw to the Store

Heavily marked down, heavily advertised, for a limited time and in limited quantities, doorbusters are all about creating sales hype to get shoppers inside a store and spending. With stores all vying for shopping dollars — and relevance — on Black Friday, doorbuster deals continue to remain very competitive across retail.

Best Buy’s consumer electronics doorbuster deals were some of the biggest draws on Black Friday (Figure 3). Checkout and Geek Squad service locations were packed. TVs were everywhere with boxes of different models on significant markdown were placed around the racetrack of the store. Other Best Buy doorbuster savings were on Chromecasts, movies, mobile, and electronics accessories, but not as much as the singular focus on TVs. 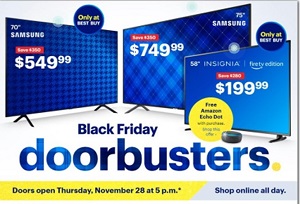 Retail implication: Mobile phones provide the ease and access for shoppers to browse and buy throughout the extended holiday season.

Walmart, Target, Amazon, and other retailers continue to compete for toy market share two years after the demise (and now slight resurrection) of Toys R Us. Real estate firm CBRE estimates a $1.3 billion void — about 5% of the toy market — left by the disappearance of Toys R Us. Like the overall holiday, Black Friday’s focus this year extended strongly to toys and benefited from tie-ins with major movies, such as “Frozen 2,” “Toy Story 4,” and the upcoming “Star Wars” release.

This Black Friday, we also saw less traditional players rise to the toy opportunity with growing share of store space and overall omnichannel attention. This list includes Best Buy, with multiple aisles of toys; Whole Foods, with full Melissa & Doug-oriented endcaps and displays; and Lowe’s and Barnes & Noble, which showcased more of its exclusives. Even Staples leaned more into gaming, promoting gaming chairs among its Black Friday deals. For the full rundown of the toy opportunities and lessons from toy as a category this holiday season, check out Kantar’s 2019 Toy Tracker

Alongside Walmart and Target, Amazon continues to stand out with a growing toy focus. Launched in early November, Amazon’s second annual toy catalog featured products with no prices, just “Scan & Shop” QR codes linking to online (Figure 4). Profitero’s recent “Pricing Wars” report showed that although Amazon beat other retailers on price by 20% across most categories, it has only a 1.7% price lead on Walmart — its next closest competitor — in the toys and games category. 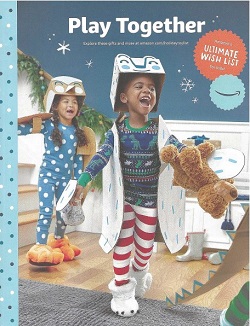 Retail implication: As key retailers continue to double down on toy for Black Friday and throughout the holidays, look for opportunities to leverage toy for a stickier in-store experience and to link with direct mail efforts that drive demand and build an emotional connection with shoppers. The disruption and innovation in this category, particularly through the holidays, also offer important lessons for those outside the category, which we cover in more depth in our 2019 Toy Tracker.

While Black Friday in the U.S. continues its omnichannel evolution, the occasion continues to reach outside the U.S. borders. At the same time, Black Friday is not for everyone. For the fifth time on Black Friday, REI closed its stores and processed no online payments, while paying employees and encouraging shoppers to #OptOutside with friends and family. However, this is the first Black Friday that REI focused its #OptOutside efforts on the global environmental crisis. In launching an “Opt to Act” campaign, the retailer promoted a national cleanup effort challenging co-op members and employees to leave “the outdoors better than they found it when they #OptOutside this Black Friday” (Figure 5). 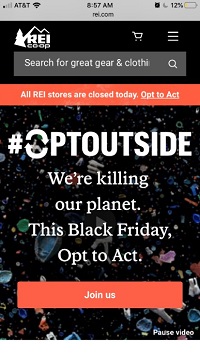 Retail implication: While Black Friday as an event may be struggling with holiday and deal blurring in the U.S., it is growing both as a global moment and as an occasion to make a statement about the values a retailer and/or brand supports.

Lastly, as the holidays draw closer, be mindful about how you interpret the various Black Friday reports that some sources have released over the past few days. In our view, and certainly from a macroeconomic perspective, they are unlikely to provide a clear indication of whether Black Friday (and total holiday) growth will be better or worse for retailers and suppliers this year. The difficulty of teasing out the direction of holiday growth from these reports is partly due to the different and shifting methodologies used to estimate sales growth around Black Friday. Also, the one- to two-day promotional period is more likely to create retail leaders and laggards that may smooth out over the entire holiday period, rather than provide an appropriate benchmark for holiday retail performance. Given these inconsistencies, we advise balancing assessments of shoppers’ holiday spending intentions with the most recent macroeconomic indicators and channel results on which Kantar bases its holiday forecasts.