Amazon Prime Day: Back to the Big Leagues

Prime Day 2021 saw Amazon go bigger, better, and bolder in a bid to reestablish its dominance. 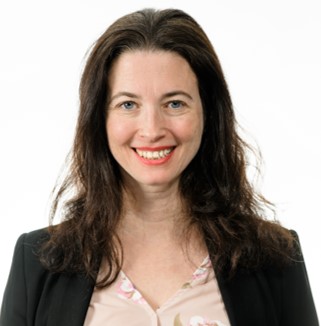 Get in touch
Consumer Shopper & RetailRetailConsulting

Amazon’s Prime Day 2021 is in the books, and if I can speak to one overriding theme, it was bigger, better, and bolder, with Amazon reupping its dominance with the undisputed promotional event of the year. While last year’s atypical October Prime Day focused on holiday, Amazon took this year’s June 21-22 event to a whole new level compared with previous years: bigger, better, bolder promotions balanced across the entire ecosystem.

We saw a stronger focus across non-Amazon brands as well as a bigger push with consumables. In fact, Amazon Grocery properties were more visibly connected to Prime Day than in the past, with prominent signage on Whole Foods Market, $1 deals, 20% off groceries on Amazon Fresh, and a range of consumables deals across Amazon.com more prominently featured as core to the Prime Day event.

Additionally, as in years past, Amazon ran promotions across its full ecosystem, but this year, deals were more plentiful and easier to find across the full services offer. For example, Prime Video prominently displayed a range of big discounts off rentals and purchases across popular movies as well as discounts with Prime Video channels. Deals could be had across Kindle and Audible. The Prime Credit card 6% cashback offer returned this year. Amazon Explore offered 50% off virtual experiences, and promotions were included across the omnichannel, such as with Amazon Books and Amazon 4-Star. Amazon even promoted its new in-garage delivery Amazon Key fulfilment program. 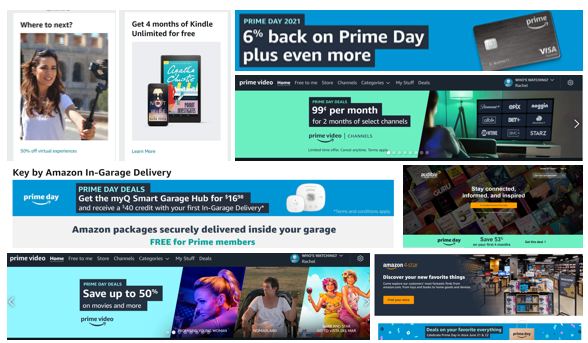 Overall, Prime Day 2021 had a new energy brought to life through creative communication, livestreams that made the event more personal and social, and a huge number of deals across most major categories. In fact, according to Amazon, Prime members purchased more than 250 million products globally during the event.

Why did Amazon move Prime Day from July to June? One reason may have been to help drive more volume in the second quarter to lap last year, when the pandemic generated a huge volume spike for Amazon. However, Amazon pointed to a different reason for the date shift: During the company’s first quarter 2021 earnings call, CFO Brian Olsavsky said the company had already planned to hold Prime Day earlier in 2020 to test a new time frame, and so it wouldn’t compete with July vacations and the 2020 Summer Olympics (which were postponed to July 2021). The pandemic forced the company to change its plans. June may be the new month for Prime Day in the future given the success of the 2021 event. The timing may also help Amazon better balance revenue throughout the year with Prime Day in the first half of the year and holiday in the second half.

The key themes that we saw during Prime Day 2021 were:

This was the true wow, with deals more balanced across big-ticket items and everyday essentials. While in years past, Amazon consistently focused promotions across devices, electronics, home, fashion, and its own brands, this year, more categories were promoted, more visibly. This strategy suggests that Amazon is looking to expand beyond its general merchandise portfolio to more brands, including consumables. There was a notable presence across a range of everyday essentials, including a particular focus on the beauty and baby categories.

This year, Whole Foods Market took a prominent place in the Prime Day ecosystem. In the past, a subtle “spend $10 at Whole Foods, get $10 to spend on Prime Day” promotion was generally on the periphery. This Prime Day, the Whole Foods Market storefront on Amazon more strongly linked to Prime Day, and it also featured in-store-only Prime Day deals on its site for a true omnichannel offer. Furthermore, Amazon offered a $150 Amazon gift card to shoppers approved for the Whole Foods Market Visa credit card. Amazon Fresh also offered strong deals, such as $1 deals, 20% or more off groceries, and discounts/coupons on its newer private label brands, such as Amazon Kitchen and Aplenty. 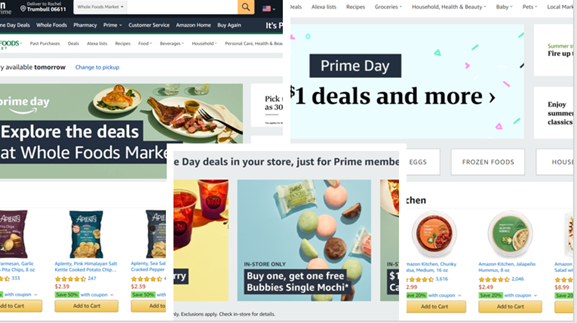 Beyond the curated assortments spanning a range of categories and services, Amazon created a central hub for Prime Day with easily findable deals through the “Prime Day Deals” navigation. Alexa was featured in a bigger way as well, prompting shoppers to ask, “Alexa, what are my Prime Day deals?” and offering special discounts. Amazon also included a personalized welcome message for Prime members. In addition, it showcased a range of livestreams consistently running throughout the event, including featured influencers. For example, Camila McConaughey promoted a variety of select cookware and beauty products during her live segment, which included the ability to chat live with her. Lastly, the event kickoff included the annual Prime Day show, this year featuring Billie Eilish, H.E.R, and Kid Cudi, which added to the element of fun that characterized Prime Day 2021.

Amazon continued to promote its small businesses (Figure 5). The homepage featured an ongoing rotator and a promotion to “spend $10 on small businesses in the two weeks leading up to Prime Day, get $10 to spend on Prime Day.” In fact, small businesses racked up $1.9 billion in sales during the promotional period, a more than 100% increase over Prime Day 2020, according to Amazon. As in years past, Amazon also featured Amazon Launchpad to support smaller, emerging brands.

Overall, it appears as if Prime Day 2021 was a big success. Not only was it the two biggest sales days for small- and medium-sized businesses ever reported, but Prime members saved more than they did in any other Prime Day in history.

Read: How to strategically partner with the top 25 US retailers