With the bank holiday weekend on the horizon and Brits geared up for the royal celebrations, supermarket sales are expected to boost in the lead up to the festivities despite the rising prices. 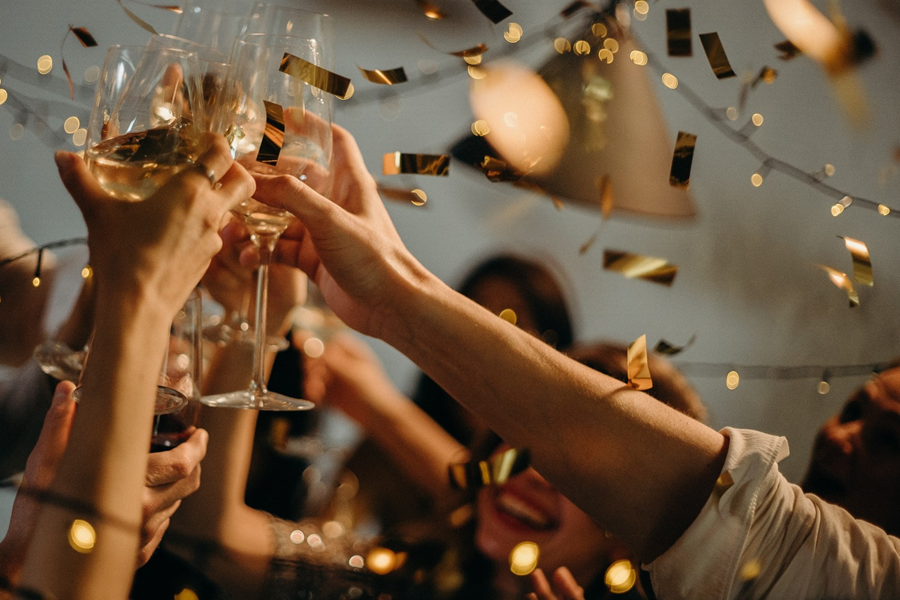 Get in touch
Grocery Market ShareUKCPGRetail

Supermarket sales fell by 4.4% during the 12 weeks to 15 May 2022 according to our latest take-home grocery figures. Sales declined more softly over the past month and dipped by just 1.7%, the market’s best performance since Christmas as the nation looks ahead to the Platinum Jubilee weekend.

Like-for-like grocery prices have risen by 7.0% over the past four weeks compared with the same time last year, the highest level of grocery inflation since May 2009. People are really feeling the squeeze at the supermarket tills and they’re having to stretch their budgets further to accommodate rising prices. To put the most recent numbers into context, if you were picking up supplies for a family fry up over the long weekend with toast, eggs, sausages, bacon, and beans it would cost you £6.83 – that’s a significant 40p increase on last year.*

Understandably, only a third of consumers now think of themselves as being in a ‘comfortable’ financial situation**. In our recent Kantar Pressure Groups survey, 43% of households described themselves as ‘managing’ while 22% said they were ‘struggling’. Within the growing group of shoppers struggling to make ends meet, the rising price of groceries is of concern to over 9 in ten people, making it the second most important issue behind the spiralling cost of energy bills.

However, despite rising inflation levels, there are signs that the British public is already looking ahead to the Platinum Jubilee at the beginning of June. With a four-day bank holiday weekend on the horizon, we’re expecting people to celebrate with friends and family. Looking back at the Diamond Jubilee in 2012, we saw a 10% boost in supermarket sales during the week leading up to the festivities. We should never underestimate the appetite for a party, especially a royal one.

Summer refreshments back then were top of the shopping list and both alcohol and soft drink sales shot up. Beer sales rose by 23%, sparkling wine sales more than doubled, and colas grew by 17%. Just like ten years ago, we’d expect barbeques to be fired up across the country and drive demand for anything that goes on the grill. In classic Jubilee style, indulgent desserts, whether bought ready to eat from the shops or made from scratch, are also expected to prove popular this year.

While we’re all keen to celebrate in style, shoppers will be carefully considering any unnecessary expense and prices are significantly different from the last jubilee. For example, in 2012 the average amount spent on a bottle of sparkling wine was £5.20 whereas now it’s £7.05.

Lidl is the fastest growing retailer this data period. The grocer’s sales increased by 6% in the 12 weeks to 15 May, marginally ahead of Aldi which increased sales by 5.8%. Lidl has hit a new market share high of 6.9%, a 0.7 percentage point increase on this time last year. Aldi also broke records, climbing to a 9% share of the market for the first time, an increase of 0.9 percentage points versus 2021. 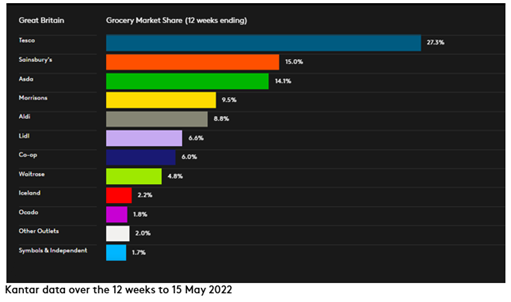 Tesco performed ahead of the wider market increasing its share by 0.4 percentage points to 27.4%. This is the seventeenth month in a row Britain’s largest supermarket has gained share, its longest streak since 2007. Sainsbury’s, the second largest grocer, sits at 14.8%.

Meanwhile Asda, which has reintroduced its discounts for NHS and emergency workers, accounts for 13.8% of the total market. Iceland’s share remained steady at 2.3%, with the 5.2 million over 60s that shop with the grocer every year soon to be eligible for the retailer’s new age-specific Tuesday discount. Morrisons holds 9.5% of the market, with Co-op on 6.1% and Waitrose on 4.9%. Online specialist Ocado’s grocery sales are 6.1% higher than two years ago and it holds 1.7% of the market.

**Kantar Pressure Groups survey of 9,362 households, fieldwork undertaken between the 8 and 20 April 2022