Grocery sales hit £11.7 billion as Brits splash out on Christmas 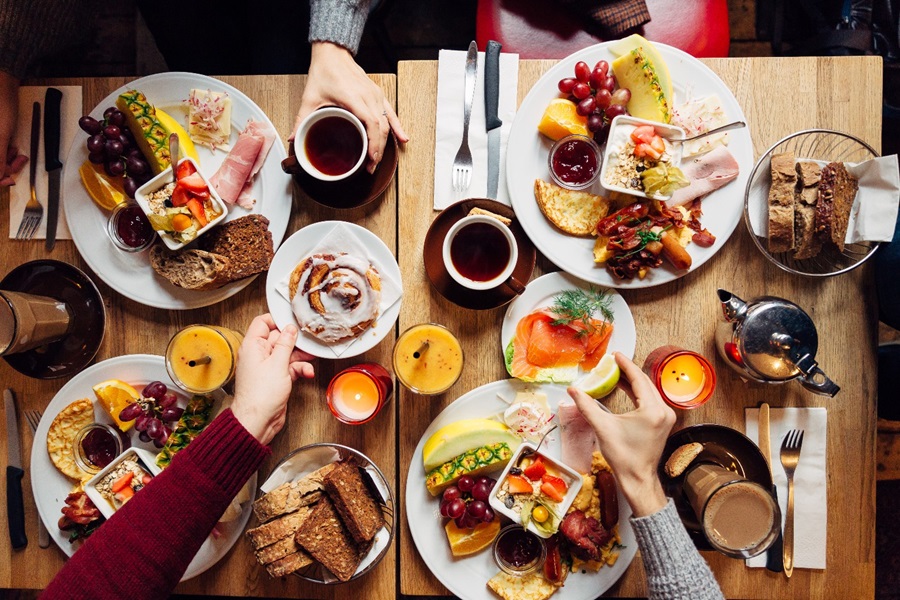 Our latest figures show take-home grocery sales reached £31.7 billion over the 12 weeks to 26 December 2021 as shoppers made the most of Christmas festivities. Although down by 3% compared with 2020, spending remains higher than it was pre-pandemic and sales were 8% stronger than in 2019.

People seized the chance to enjoy Christmas with friends and family after last year’s muted festivities, and grocery sales hit £11.7 billion over the month of December. This lofty spend figure is down just 0.2% on record 2020 sales, when several areas faced restrictions, and the data suggest that while there weren’t formal rules in place across the UK this year, many people celebrated at home again due to the Omicron variant of COVID-19. We can see just how much spending accelerated in December compared with earlier in the year by looking at the average trend during March to November when sales were down by 2.5% against 2020.

While spending on many traditional Christmas dinner items was broadly similar compared with last year, there was ample evidence of people treating themselves and guests. There’s no doubt many of us still love a mince pie, with sales of the sweet treats reaching £62 million in December, a jump of 7% on 2020. A similar amount, £61 million, was spent on Christmas chocolates too, with sales soaring by 21%. It looks like people came prepared for indulgent celebrations and indigestion remedy sales also rose by 8%. More bitter was the decline in sprout sales, which dipped by 3%, but the traditional green hasn’t fallen out of favour just yet as almost half of all households in Britain served them up in December.

We saw new dietary trends coming through in the data and plant-based foods proved particularly popular this year, even before Veganuary gets underway. Chilled vegetarian ranges increased sales by 6% while their frozen equivalents were boosted by 4%.

Premium own-label sales broke records this Christmas and shoppers spent £627 million on supermarkets’ own upmarket lines over the four weeks to 26 December, an increase of 6.8% versus 2020. The appetite to celebrate and splash out that little bit more this year pushed sales of luxury own-brand products up across the board. Sparkling and still wine sales grew 22% and 18% respectively, while crisps surged by 31%. Tesco’s Finest and Sainsbury’s Taste the Difference are easily the largest premium own-label ranges, but we saw the fastest growth from other ranges such as Asda Extra Special and Iceland Luxury.

Alongside Christmas indulgence, rising prices also pushed up shopping budgets. Grocery price inflation reached 3.5% in December, adding nearly £15 to shoppers’ average monthly grocery bill. We saw prices rise faster for a short while in spring 2020 when promotions were cut to maintain product availability, but before that you would have to go back nearly four years to January 2018 to see inflation running higher.

As is traditional, the busiest shopping day of the year was 23 December. Food and drink spend peaked two days before Christmas. The real driver of bumper sales on 23 December wasn’t online though, as we saw the largest number of in-store visits since March 2020 this month. Shoppers clearly trusted that supermarket shelves would remain well stocked, and they didn’t feel the need to rush out much earlier to get their favourite festive treats.

Individual retailers found it challenging to secure year-on-year growth over the Christmas period following last year’s highs, but every major grocer increased sales compared with the final 12 weeks of 2019. 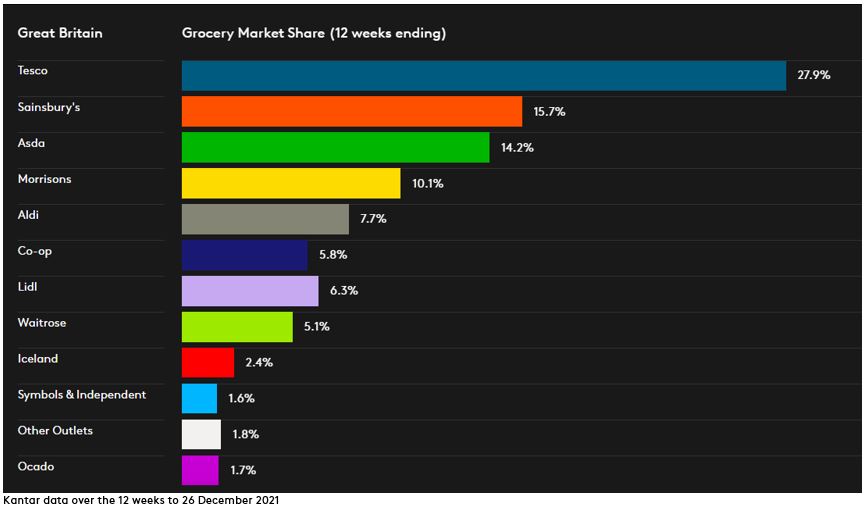 Online specialist Ocado was the only retailer to buck the trend over the latest 12 weeks and grow versus last year, increasing its sales by 2.5%. At the same time, Tesco continued to gain market share, up by 0.6% to 27.9%, the highest it’s been since January 2018. Aldi, Lidl and Waitrose also grew their shares by 0.3%, 0.2% and 0.1% respectively.

Read: British plan for a treat-filled Christmas despite price rises