A Christmas cracker for the Irish grocery market, as sales surpass €3 billion

The grocery market in Ireland grew compared to the same period in 2019, though sales were down slightly year on year, as people returned to eating out. 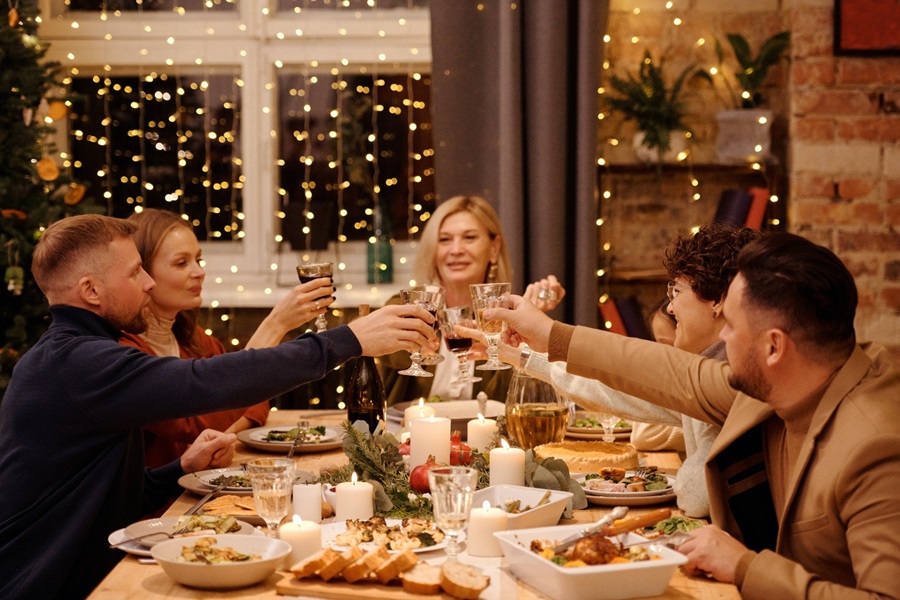 Irish grocery sales were worth €3.1 billion during the 12 weeks to 26 December 2021, according to our latest figures. The market grew by 10.9% compared with the same period in 2019, though year on year it was down by 5.2%, as people enjoyed more freedom to spend money in restaurants and bars.

With household mixing allowed this year, the Irish public geared up for a larger Christmas celebrating with friends and family. €1.1 billion went through tills during December alone (just 0.6% lower than 2020’s record-breaking figure) and an increase of €141 million compared with 2019, equivalent to an extra €65 per household. More guests meant larger trips to the supermarket for many people in the run up to Christmas. Shoppers were eager to make up for lost time last year and willing to spend a little more on the big day itself to make it special.

An extra €3.1 million was spent on Christmas dinner, with whole turkey sales up by €1.9 million as the public splashed out on a showstopping centrepiece. Not every festive favourite was so fortunate though and sales of Brussels sprouts dipped by 1.4%, with only three-fifths of Irish households taking them home this month.

Sales of other festive foods, including Christmas biscuits, cheese and confectionary, were €10.5 million greater this year than last December. Homegrown Irish brands were the order of the day and standouts included Brennans bread and Keogh’s crisps, which saw sales rise by 6.6% and 34.3% respectively. People’s desire for a more luxurious Christmas also pushed up premium own label sales to a record-breaking €58 million over December, €604,000 more than in 2020. 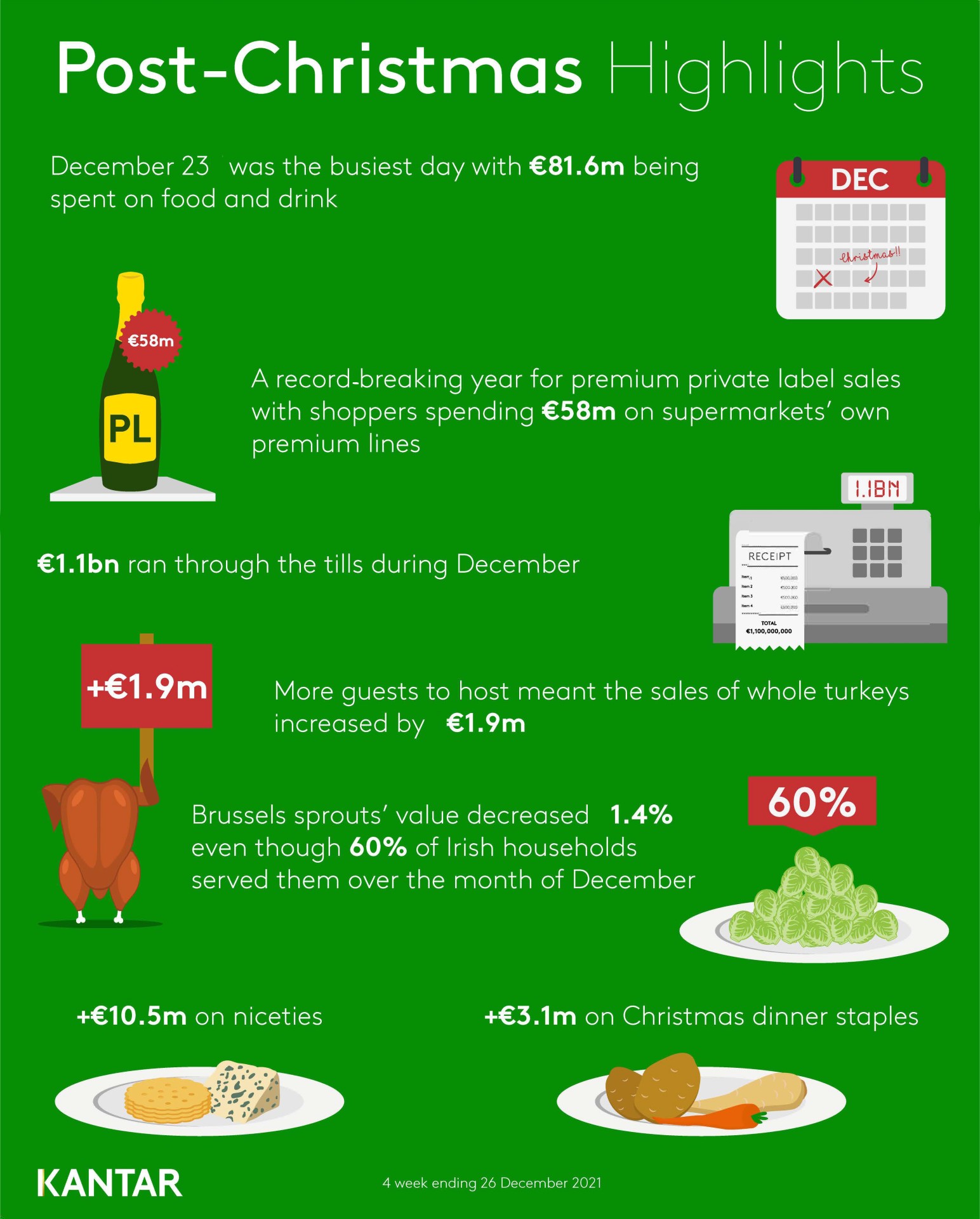 Record-breaking year for premium own label

Over the latest 12 weeks, year-on-year take-home alcohol sales fell by 22.9%, though they were up by 6.7% compared with Christmas 2019. Pubs were only open for three of the final twelve weeks of 2020, which resulted in unusually high sales of alcohol at supermarkets and independent shops. It was always going to be difficult to match that this year, but the numbers are still positive compared with prior to the pandemic. No-alcohol and low-alcohol options had an even stronger performance as the value of the market rose by 12.2% over the year. Young people especially have been buying these products and the sector really has potential to grow this year, particularly as it will be boosted by its exemption from minimum unit pricing and separated stocking rules.

As the winter months took hold, cold and cough remedies saw significant growth. While this Christmas felt more normal than the one before, it was still very much a pandemic year. Consumer confidence was high thanks to the vaccine rollout, but shoppers were still wary of rising COVID-19 cases, plus regular colds and flu. They spent an additional €1.2 million on cold treatments and €1.4 million on cough liquids in the 12 weeks to 26 December.

Online grocery sales continued their strong run this period. Nearly 17% of Irish households purchased groceries digitally over the latest 12 weeks, with sales soaring by 9.3%. The Irish public has really embraced online shopping and more and more people are trusting delivery services to get what they need. Online is far from reaching its ceiling. We’re still seeing new buyers being converted, and those shoppers are buying increasingly bigger baskets too.

As usual, 23 December was the busiest shopping day of the year, with people spending a combined €81.6 million on their final shop before Christmas. Despite concerns about supply chain issues and inflation, consumers were confident that retailers would have fully stocked shelves and they left much of their food shopping until the final few days. That boosted retailers over the festive trading period and all the major grocers were in year-on-year growth over the four weeks to 26 December.

Looking at the full 12 week-ending picture, Dunnes retained the number one spot as Ireland’s largest retailer, securing 23.2% of the market. SuperValu and Tesco were both close behind, with shares of 22.2% each, while Lidl and Aldi accounted for 11.7% and 11.6% respectively.

Read: Price rises for festive favourites as Ireland looks ahead to Christmas

Get in touch
Related solutions
Consumer Goods Panel
We monitor FMCG purchases and trends across all retail channels, through the biggest consumer panels globally.
Learn more
Out-of-Home Panel
Get useful insights and trends data from our consumer panels for food and beverages consumption and use outside of home.
Learn more
Worldpanel Plus
Understand the “why behind the buy”. Find more shoppers, and be chosen more often, to unlock sustainable growth.
Learn more