Shoppers made 58 million more visits to the supermarket in the most recent four weeks than they did in May 2020. 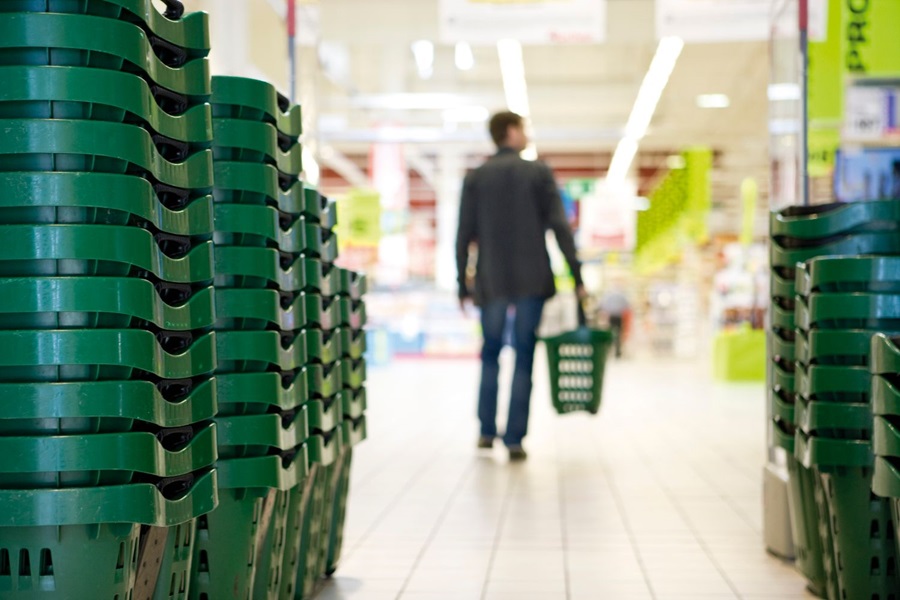 The latest take-home grocery figures from Kantar show sales fell by 0.4% during the 12 weeks to 16 May 2021. This year-on-year decline reflects a tough comparison with exceptionally high sales during the first three months of the pandemic last year. However, sales remain stronger than they were before coronavirus and shoppers spent an additional £3.8 billion at the supermarket in the past three months compared with the same period in 2019.

As lockdown eases, people are returning to more normal habits and we can see that reflected in grocery sales. Many of us this time last year were eating all our meals at home and we bought extra food and drink as a result. Now we’re seeing take-home grocery sales dip versus 2020 as people are able to eat in restaurants, pubs and cafés and can pick up food on the go again, grabbing a sandwich, for example, while they’re out and about at the weekend. While not captured in these take-home figures, on-the-go grocery sales look set to be a significant driver of growth for supermarkets over the next few months.

As the vaccine rollout moves full steam ahead, consumers are getting more confident venturing back out to stores. Shoppers made 58 million more visits to the supermarket this period than they did in May 2020. The greatest acceleration has been in London, where trips are up by more than a quarter. And in other changes, there are signs that the big weekly shop, which made a comeback last year while people tried to reduce time spent outside of home, may be on its way out. Basket sizes have fallen for three months in a row and the average price of a trip to the grocery store over the month to 16 May is £22.82, the lowest since March last year.

The proportion of supermarket sales made online – another hallmark of shopping habits last year – remains much higher than 2019 levels but fell back from 13.9% in April to 13.4% in the latest month. Convenience stores, both independents and smaller formats of the major chains, are seeing some of their market share gains unwind too. Collectively these smaller stores now account for 12.5% of sales, down from 14.9% in May 2020.

As inclement weather did its best to dampen outdoor dining, grocery spending also reflects a wet start to summer 2021. During the first national lockdown last year many people found solace in the early summer sunshine, something 2021 has so far failed to deliver. This saw sales of barbeque staples like burgers fall in May by 20% year on year. Chilled desserts, up by 14%, fared better – no doubt buoyed by those hardy people braving the weather to entertain friends and family in the garden.

Re-entering the social sphere over the past month means that our lives are becoming busier again and convenience is rising back up the agenda. Efforts to make meal times easier are reflected in a rise in sales of chilled ready meals by 20%, cooked poultry by 28% and sandwich fillings by 12%. Ditching the sofa and emerging from our homes also saw people prioritise their personal appearance. As a result, sales of mouthwash grew by 16%, hairstyling products by 26% and shoe care products like polish by 50%.

Aldi and Lidl both grew ahead of the market this period and gained market share in the latest 12 weeks with take-home sales up by 5.2% and 4.6% respectively. Sales at the discounters had been impacted by shoppers favouring online and cutting back on the number of stores they visited last year, but the tide has turned this period. Aldi’s share increased by 0.4 percentage points to 8.1% and Lidl’s by 0.3 percentage points to 6.2%.

Ocado is the fastest growing retailer, gaining 0.2 percentage points of share this period. However, its sales substantially slowed year on year to 15.4%. Tough annualisation because of an exceptional 2020 meant spend at symbols and independent retailers and Co-op were down in comparison with last year, but remained in double digit growth against the more typical sales of 2019. Convenience stores also benefited from the return of on-the go food and drink sales – representing additional growth that is not captured in these take-home figures. It’s a similar story at Iceland, which saw sales boom in 2020 as shoppers stocked up on frozen food, making growth harder to come by this year.

All four of the largest supermarkets gained market share. Asda was the biggest winner, with sales up by 1.9% over the 12 weeks and share increasing to 14.4% from 14.1% last year. Sainsbury’s grew sales by 0.7% while Morrisons was up by 0.3% and Tesco sales remained flat versus last year. All secured an additional 0.1 percentage point of share. Waitrose too won market share, up to 5.1% from 5.0% last year, with sales growing by 2.1%.

Grocery inflation now stands at -1.2%. The good news for households wanting to keep on top of their grocery spending is that like-for-like prices are lower than last year when fewer products were bought on promotion. This is the fastest fall in prices since August 2016, a trend we expect to normalise as the year progresses.

Read: Locked down Brits top up their groceries to the tune of £15.2 billion over the past year