With outdoor hospitality returning on 7 June, shoppers spent 14.9% less on home cooking ingredients in the past 12 weeks. 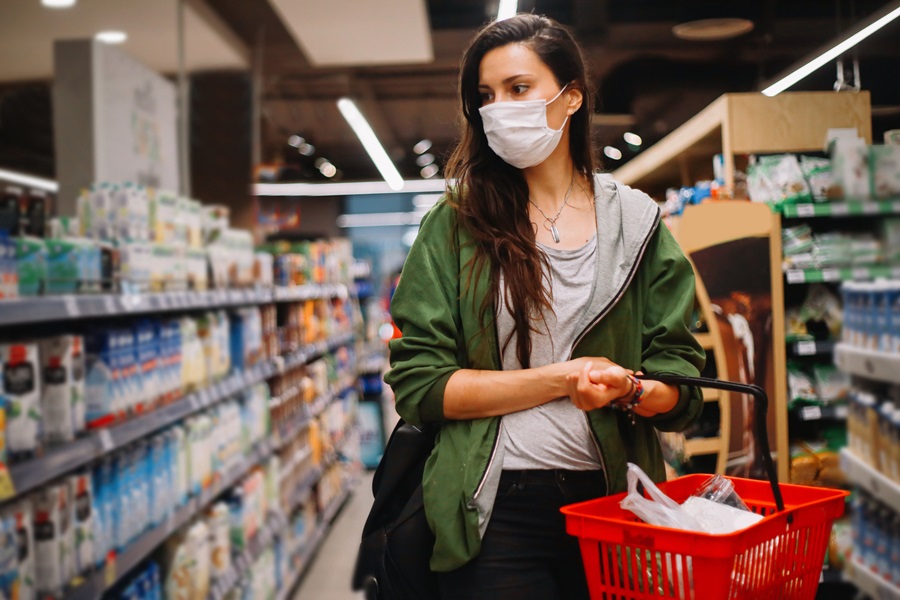 The latest figures from Kantar show that grocery market sales declined by 5.7% year on year during the 12 weeks to 13 June 2021. Sales were down 7.0% in the most recent four weeks as warmer weather and outdoor hospitality returned and the market continued to annualise against the extraordinary supermarket spending of the first lockdown.

Grocery sales may be lower than last year, but we are still a far cry from normal life. Spending in the latest 12 weeks was an incredible 17.6% higher than before the pandemic, and the average Irish household spent €218 more on groceries than 2019. That being said, there are early signs of newfound freedoms in Irish shopping baskets.

With outdoor hospitality returning on 7 June, people have finally been able to enjoy a night away from the kitchen. Sales of home cooking ingredients like oils, herbs and spices, and ready-made sauces declined by 14.9% in the latest 12 weeks, and shoppers spent €94.4 million less on alcohol in the supermarkets as they returned to pub gardens. It’s clear that we’re edging back to eating and drinking out, but sales of take-home alcohol are still a whopping 36.4% higher than before the pandemic and, now that people can visit friends at home, some of their spending will have been redirected to on-the-go purchases, which are not captured in this data.

Shoppers stock up on summer essentials

The reopening of hospitality coincided with a spell of warmer weather after an unseasonably cold May. Summer definitely took its time this year, but Irish shoppers have now embraced the sunshine and stocked up on summer essentials. Sales of sun care products soared by 59% compared with the previous month, and shoppers splashed out €948,000 more on ice cream and €566,000 more on burgers and grilling food than in May.

Confidence is gradually returning in Ireland as the vaccine rollout continues. Warmer temperatures and vaccine numbers mean many of us are feeling happier to pop to the shops and make more frequent, smaller trips – visits were up 1.7% this month and basket sizes shrank by 8.1%. The tide may also have turned on one of the biggest trends of the past year: online sales declined by 4.4% in the past four weeks, the first drop since March last year. Retired households are driving this trend and spent €2.4 million less online than last year – a clear indicator of rising confidence.

SuperValu remained the largest grocer during the past 12 weeks with a 22.3% share of the grocery market. The retailer benefited from shoppers visiting stores more often than this time last year, adding an extra €75.4 million to its takings. SuperValu’s phenomenal growth during the past year will mean some tough comparisons in the next few months. However, we shouldn’t lose sight of the longer-term context – the supermarket has grown by 24.2% since 2019, well ahead of the overall market at 17.6%.

Tesco maintained its second position in the table with a market share of 21.4%. Its performance was boosted by new shoppers, which contributed an additional €29.2 million to its overall performance. Dunnes, which accounted for 21.2% of grocery sales this period, also welcomed new shoppers during the latest 12 weeks and encouraged existing customers to return to store an additional 1,800,000 times.

Both Aldi and Lidl benefited from the return to stores and slight shift away from online shopping this period. Lidl held 12.9% of the market, 0.7 percentage points higher than last year, and Aldi’s market share was 12.3% during the 12 weeks. Aldi and Lidl are also major players on a global level, and their solid domestic performance this month is backed up on an international scale by Kantar’s recently published BrandZ report, which measures the value of global brands. Aldi’s brand is now worth over $17.5 billion worldwide, while Lidl’s is valued at $11.7 billion.

Read: Irish supermarket sales start to settle after one year in lockdown