Treatment of CLL just became even more chemo free as Imbruvica in combination with Rituxan was shown to be more effective than FCR. 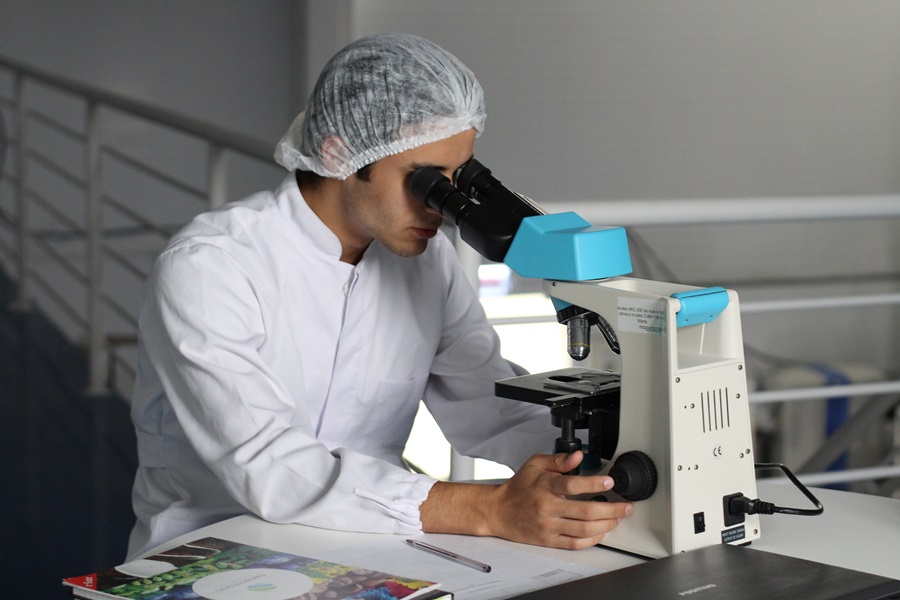 For the past decade, chemoimmunotherapy (chemotherapy combined with an anti-CD20 monoclonal antibody) has been the standard first-line treatment for patients with Chronic Lymphocytic Leukemia (CLL), where a patient’s age and fitness status dictated which chemoimmunotherapy regimen would be most appropriate. However, within the last couple of years, a deeper understanding of CLL B-cell biology has led to the introduction of several novel targeted agents including ibrutinib (Imbruvica®, Janssen / Pharmacyclics), idelalisib (Zydelig®, Gilead), venetoclax (Venclexta®, AbbVie / Roche) and most recently duvelisib (CopiktraTM, Verastem), which have revolutionized the CLL treatment paradigm.

The most notable change to the standard of care was the introduction of ibrutinib, a Bruton’s Tyrosine Kinase (BTK) inhibitor, that has shown robust and durable efficacy in several clinical trials. Ibrutinib was first approved by the U.S. FDA in 2014 for relapsed / refractory patients and moved into the front-line setting when approved in 2016 by the U.S. FDA based on results from the RESONATE-2 trial, which showed ibrutinib improved PFS over chlorambucil in patients aged 65 or older without the high-risk TP53 mutated/del17p marker1. A follow-up study conducted by the National Institutes of Health confirmed ibrutinib’s efficacy in the high-risk TP53 mutated/del17p population2. Since its front-line approval, ibrutinib use in treatment naïve patients has expanded, particularly in patients with high-risk TP53 mutated/del17p where shorter overall survival (OS) is achieved with chemoimmunotherapy3,4,5 and in elderly or unfit patients where ibrutinib has demonstrated superior efficacy over more tolerable chemoimmunotherapy regimens chlorambucil, obinutuzumab1 and bendamustine, rituximab (BR)6. The only remaining patient type where the benefit of front-line ibrutinib still remains elusive is in young, fit CLL patients who do not harbor TP53 mutated/del17p, where an aggressive chemoimmunotherapy regimen is typically employed.

Fludarabine-cyclophosphamide-rituximab (FCR) is considered the standard of care for young, fit non-TP53 mutated/del17p patients. Several Phase 3 clinical trials have established that FCR results in long-term clinical remission in many patients and improves PFS and OS compared to chemotherapy alone and BR3,7,8. In addition, FCR induces a high rate of minimal residual disease (MRD) negativity at completion of therapy. MRD has been shown to have prognostic value where patients who achieve MRD negativity have an associated longer PFS and OS9. Based on subgroup analysis of the Phase 3 CLL8 trial3, a mutated immunoglobulin heavy-chain variable (IGHV) region was shown to be a strong predictor of long-term PFS when treated with FCR, with over half of patients still in remission after 12.8 years of follow-up compared to only 9% of patients with unmutated IGHV in remission after similar follow-up7, strongly supporting FCR treatment in mutated IGHV patients. However, one must also consider that FCR is an aggressive chemoimmunotherapy regimen and is associated with high rates of serious adverse events, especially infections and myelosuppression. Hence the regimen is often limited to patients fit enough to endure treatment-related toxicities and complete all six cycles.

Given ibrutinib’s success as a monotherapy in the front-line, the next focus of investigation is how can the agent best be combined with other novel agents to further improve outcomes. With the prospect of more effective ibrutinib-based combinations, the question becomes will there still be a role for chemoimmunotherapy in front-line CLL treatment for young, fit patients? Until now no randomized, comparative studies were conducted to definitively answer this question. However, the ECOG-ACRIN Cancer Research Group sought to answer just that when bravely initiating its Phase III E1912 trial (NCT02048813) investigating ibrutinib plus rituximab versus FCR, the gold standard for young, fit patients who are not TP53 mutated/del17p.

The results of ECOG-ACRIN E1912 were presented on Tuesday December 4 at the 2018 American Society of Hematology as a Late-Breaking Abstract10. The trial enrolled 529 patients, who were treatment-naïve, aged ≤70 years old, and did not harbor the TP53 mutated/del17p marker. These patients were randomized 2:1 to receive ibrutinib (oral daily until disease progression) with rituximab (IV for 6 28-day cycles initiated after one month of ibrutinib monotherapy) or to receive FCR (IV for 6 28-day cycles) and stratified based on age, performance status, disease state, and del11q status. About 20% of total patients harbored del11q and 71% had unmutated IGHV, both poor prognostic markers. The ibrutinib, rituximab arm had a slightly higher proportion of unmutated IGHV patients than the FCR arm (75% versus 62%).

These data are the first to demonstrate that an ibrutinib-based regimen (ibrutinib, rituximab) is superior to FCR in young, fit patients based on a randomized, head-to-head trial. This evidence will certainly shift the treatment paradigm further away from chemoimmunotherapy and toward novel agent use in front-line CLL. However, we cannot definitively count chemoimmunotherapy out for good, at least for now. While the subgroup analysis from E1912 suggests patients with mutated IGHV may still benefit from ibrutinib, rituximab, the sample size was small and the confidence intervals for the hazard ratio crossed one. Given FCR has been historically beneficial for these patients, more robust and longer-term data is needed to oust its use in this patient population. About 30% of all patients at presentation harbor mutated IGHV without the TP53 mutated/del17p marker11. Of these patients, those who also present as young and fit may still receive FCR over ibrutinib, rituximab as IGHV status may become an increasingly more important treatment decision tool.

In addition, ibrutinib-based regimens are not able to induce high rates of complete responses or MRD negativity. Although the utility of MRD negativity is still not fully crystallized in CLL, strong links to improved efficacy outcomes suggest regimens may be more robust and lead to deeper remission in the front-line if MRD negativity is achieved. Also, several clinical trials are investigating MRD negativity as an indicator to allow treatment discontinuation with novel agents. Current ibrutinib-based regimens including the ibrutinib portion of the ibrutinib, rituximab regimen in E1912 must be taken daily until disease progression. Given these regimens’ inability to induce strong MRD negativity, it is unlikely treatment can be discontinued and response maintained.

Patient preference may also influence uptake of the ibrutinib, rituximab regimen compared to FCR. The continuous nature of ibrutinib treatment may push some in favor of chemoimmunotherapy that has a fixed duration followed by a treatment-free interval. Another consideration is that ibrutinib’s continuous administration raises toxicity concerns both in terms of adverse events and financial burden. Ibrutinib has been considered well-tolerated when investigated in clinical trials with adverse events distinct from those of chemotherapy. However, as more long-term real-world evidence is reported, intolerance is emerging as the key driver for ibrutinib discontinuation. A recent study analyzing over 600 ibrutinib patients in the U.S. cites 26% of patients discontinued ibrutinib due to toxicities, most commonly due to arthralgia, atrial fibrillation, and rash12, suggesting intolerance not disease progression may impede long-term ibrutinib use. Also, given ibrutinib’s prolonged treatment duration, many patients are financially impacted through increased out of pocket costs, which may lead to dose reduction or treatment discontinuation. These challenges associated with continuous ibrutinib therapy highlight the need for more combination therapies that induce stronger MRD negativity to allow fixed, limited treatment durations.

Results from E1912 will make huge strides toward a chemo-free regimen in young, fit CLL patients, but certain questions remain. Is rituximab deepening responses when combined with ibrutinib in the young, fit population or would ibrutinib monotherapy yield similar results? Data presented earlier at the ASH 2018 meeting in front-line elderly, unfit CLL demonstrated the ibrutinib, rituximab combination was non-inferior to ibrutinib monotherapy when demonstrating superiority over BR13. While E1912 cannot address this question in the young, fit population, the ongoing NCRI FLAIR trial which has both an ibrutinib monotherapy and ibrutinib, rituximab arm will provide clarity in the future. Can other novel agent combination be devised that would allow a patient to discontinue therapy while still maintaining a durable, deep response? The most promising is that of ibrutinib in combination with venetoclax. Phase II data from the CAPTIVATE trial in patients <70 years old showed after 1 year of treatment ibrutinib plus venetoclax led to a 100% objective response rate and 79% of patients with undetectable MRD in both the blood and bone marrow14. The combination is currently being assessed in another arm of the Phase 3 NCRI FLAIR trial against FCR until MRD negativity or for a maximum 6-year treatment duration and in the Phase 3 CLL13 trial in combination with obinutuzumab as a triplet until MRD negativity or for a maximum of 3-year treatment duration compared to chemoimmunotherapy standard of care for fit patients. As more of these front-line novel agent, fixed-duration combination trials comparing to FCR readout, if positive, front-line CLL treatment chemoimmunotherapy will continue to fade away.